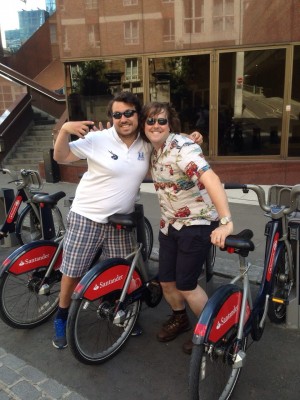 The event that has been described by some UL members as ‘the highlight of the UL calendar’ this year fell on Saturday 6th June, an excellent day to spend gallivanting round the centre of London in the bright sunshine of English summer.

The meeting place in the morning was The Crosse Keys, where breakfasts, and in some cases, pints, were consumed in preparation for later exertions. Jacqui and Jenny, the organisers, alongside their able team members, Nix and Chris, gave out impressive Treasure Hunt packs to all the teams and explained the rules which would govern this particular bout of ULopoly. Basically, teams would move around the city according to the dice which would be shaken by the organisers from their base in the pub. A shake of the dice would give a number, which corresponded to a tower – but before the teams could set off for their destination they first had to solve the anagram which would tell them what the tower’s name was. There were various points for extra activities, and a musical quiz bonus round attached to the back of the pack. 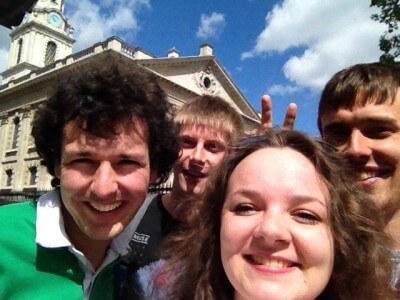 All team members having made it to the pub, we were off. I was in Team Dog with Robert, Ben C and (briefly) the Poodle. Our first tower was St Martin in the Fields, where we chatted to a flag seller, got confused about counting steps, and took a bad selfie in which StMitF was just about visible. We rang the organisers, and were given our second tower – St Mary le Bow. So far so good. We had a problem with de-anagramming the next tower, so we went to find Chris in The Pride of Spitalfields and get 30 bonus points instead. We were given enough hints to work out that our third tower would be St George’s, Borough High Street, and we duly set off. We were peeved to discover that the ‘clue’ for this tower did not, in fact, relate specifically to this tower, and rang up for our next clue. Westminster Abbey. 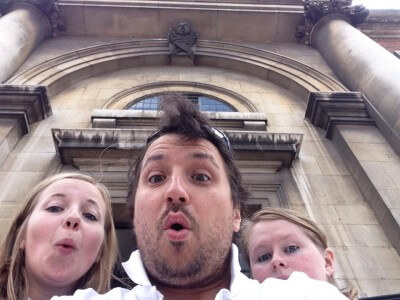 So we tubed to Westminster, got bored of tourists, and rang up for our next clue. Shoreditch. I believe it was at this point that we decided to play the system, on our Winning > Taking Part strategy. We found and exploited the ‘photo of a theatre/statue/animal = 5 points’ loophole, and we may have got into trouble a little bit…

Anyway, I abandoned my treasure hunt team at this point to go and earn some moneys ringing at Hart Street, but we were all reunited in The Minories at 6pm or thereabouts to hear the results. Team Dog narrowly evaded being disqualified, gaining third place and 5 finger puppets, which made me very happy (yay). First place was awarded to “Richard’s Bitches” (Rupert, Katie & Becca), their prize being some beautiful mugs & second place to the two Toms & Garry Barr who were awarded bouncing eggs. 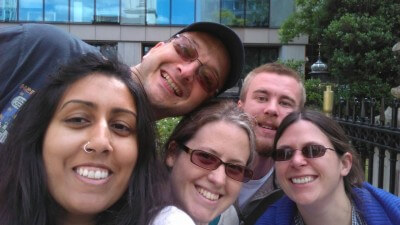 The team from Oxford, the “Belsize Boozes” came last and if memory serves were given a pineapple (which they proceeded to eat in the pub). We were joined by a couple of Southwark ringers and pubbing continued in The Liberty Bounds to end a very enjoyable day.

Many thanks go to the organisers, Jenny and Jacqui, for all their hard work in creating the Treasure Hunt this year, it was brilliant! Also apologies for any inconvenience caused by Team Dog’s cheeky cheating, I blame my team mates entirely. Roll on Treasure Hunt 2016!