On Saturday, 26th July 2014 the Staffordshire village of Kinver had only one focus, the wedding of Rupert Littlewood and Jenny Lane. It was the talk of the locals on the High Street in the morning and anyone nearby could not fail to notice the amount of ringing taking place; Kinver church is at the very top of a steep hill, and the bells shout out across the village. The ringing started at 9am with a ASCY peal at Kinver, an OUS peal at Wolverley and a UL peal attempt at Enville, the latter of which was unfortunately lost due to mechanical failure. It was a hot day for peal ringing, which meant the bands were very grateful for the boxes of refreshments thoughtfully provided in the ringing rooms. 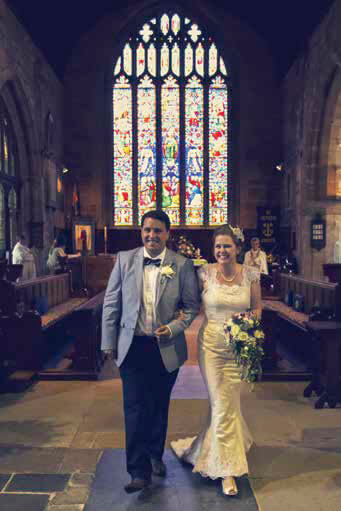 Whilst the hot day was un-ideal for peal ringing and running up and down the steep hill, with the sun shining brightly it was absolutely perfect for a wedding. The church was beautifully decorated with flowers when the beaming bride walked down the aisle with her proud father. Jen wore and elegant cream dress embellished with lace and was accompanied by her four bridesmaids, beautiful in turquoise, and adorable flower girls and page boy. Rupert, who was his usual relaxed, friendly, unfazed self, waited for his bride along with his three best men. Rup had not wanted to pick only one of them and so all three shared the various responsibilities through the day. The service was deeply personal to Rup and Jen, with the prayers, readings, including Winnie the Pooh, music and hymns all chosen to have great personal significance to the happy couple. Later in the day the groom complemented the congregation on our singing, apparently we sang as if we were Welsh, high praise from Rup.

After drinks in the church and photographs outside, the bride and groom made their way to reception at Kinver Church Hall in a 1953 Riley. The hall had been lovingly decorated by the couple, their friends and families with bunting made by the guests and gorgeous home-grown flowers. Outside there were gazebos with games, balloon art and hale bales for seating, while the bar was operated by Nick, a talented chap and fellow ringer who had also played the organ at the service – pulling pints and playing Widor is an impressive range of skills to demonstrate on one day. 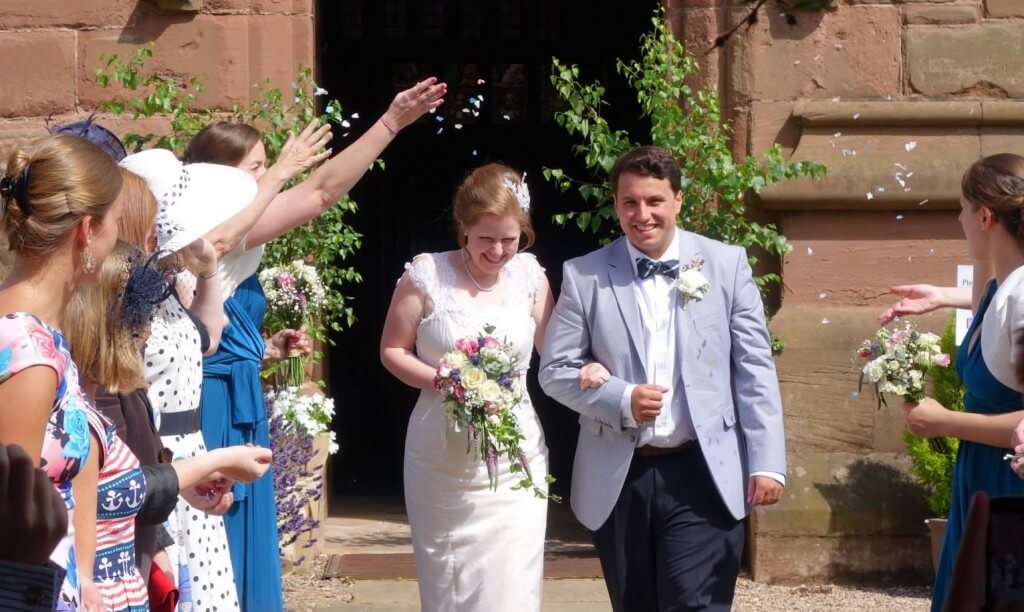 The four-course meal involved nominated guests carving the main course. On top table the bride did the honours, demonstrating some of her knife skills perfected in her career as a surgeon. Following the meal the Father of the Bride gave a short but perfectly formed speech, at the end of which the Mother of Bride presented Rupert with a big red book: ‘Rupert Littlewood, this is your wife’. The groom, with the traditional thanks on behalf of him and his wife, gave a speech which brought a tear to the eye of many guests, including to mine. Which brought us to the Best Men’s speeches, all three of them. Giles Littlewood covered Rupert’s early years, Charles Herriott documented the university years, which would be more accurately described as the Snooker Centre years and then Andrew Bradford told us about many happy years of friendship.

Rup and Jen are vivacious people who live life to the full, therefore it should have been no surprise when their first dance, to Mumford and Sons, was joyous, uplifting and not at all serious. Following this, the evening was spent dancing, talking, drinking and playing silly games, and all too soon it was time to cheer the bride and groom as they walked down the hill to their accommodation.

Rup and Jen are a very special couple, whose caring and enthusiastic approach to life means they are much loved and valued by their friends and families, many of whom were delighted to be there to celebrate their wedding day. It was a very special way to start their married life and I am sure they will go on to have many happy years together.