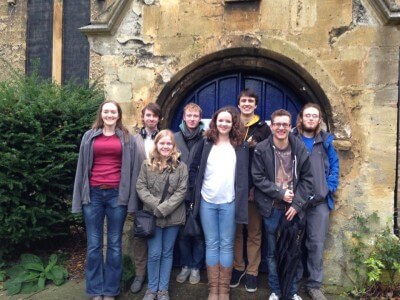 Since the first in 1979, the SUA has established itself in the diaries of all university change ringing societies in the south of England. Just as the NUA has for the north. In fact, the UL dominated the early years, of the SUA, winning seven in a row before coming 3rd in 1986. This year it was the turn of Oxford to host. SUA 2014 was market by a somewhat quieter atmosphere than in previous years. Notably, there was not a major UL contingent this year. Many decided to turn up on the Saturday for the striking competition and then leave after the traditional ceilidh in the evening. It wasn’t like that in my day.

Southern Universities Association traditionally starts on the Friday, and this year was no exception. Not being on Facebook I tend to miss out on a lot of things. Because of this, I was unaware as to what everyone else’s plans were. I had a copy of the itinerary, so, as a result, I journeyed up solo in the hope that I would bump into someone I recognised. Having spent the Friday morning frantically trying to finish an essay before the weekend, I managed to get the Oxford tube around mid afternoon.

I arrived in Oxford in time for the first tower, service ringing at St Mary the Virgin. Not a single member of the UL was in sight, so I was forced to talk with members of the CUG. After ringing at St Mary’s there was enough time for a cheeky pint in The Chequers before the next tower. To my pleasant surprise the CUG were drinking pints of beer.

Feeling suitably refreshed, I made my way (along with the OUS and the CUG) to Carfax. By now I was no longer the only UL member present, Clare Dyer and Nix Ruberry (with Ben Clive) were now on the scene. Shortly after, everyone retired to the St. Aldates Tavern. Things start to get a little bit hazy.

I was reminded the following day that this was the point of the evening when I started to buy whisky. My receipts confirmed it. I remember standing at the bar and watching the bar maid going up a ladder and fetching a bottle from a cabinet and subsequently pouring three double whiskeys. I don’t know what I asked for or for whom I got them. However, I remember it being good. So I got more. At some point in the evening Jacqui and Chris Brown turned up.

The long walk home didn’t seem so long. Having thought I lost my camp bed in the pub I was pleased to find it at the scout hut. Apparently I had asked Chris to drive it over in his car.

Get a load of young, drunk bell ringers in a church or scout hall and its inevitable that they will get up to some shenanigans. And by shenanigans I of course mean getting out the children’s toys and having a good old play. This year it was foam balls. Having driven to the hall Chris deserved a stiff drink. He impressively lead the way in nearly polishing off a large bottle of gin.

Such excitement is very tiring and it wasn’t long before all were fast asleep, ready for the striking contest the next day. 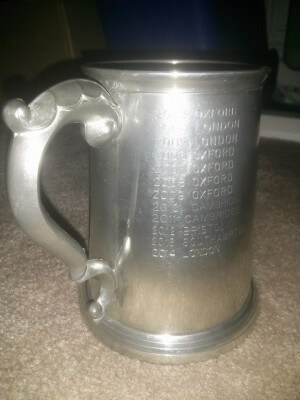 Many different alarms went off over the course of the morning. The first being at 6. The great awakening occurred around 7:30ish. Unlike in previous years, there was no mountain of bacon to rouse the sleepers, only the cold autumn light and a groaning head. However, everyone got up promptly and after a short bus trip we were back in Oxford city centre.

The draws were being held at The Swan and Castle for 9:30. Despite the use of a smart phone, finding the pub proved to be somewhat problematic. However, found it was, and with current members of the UL in it. The 8 bell was held at St Thomas the Martyr. The UL didn’t have to wait long to take their turn. We were second, after Oxford. As we waited outside the Church we contemplated on the length of the touch being rung. Notably, that it was far too long and that more valuable time could be spent in a pub. It was at this point that I was reminded of the whisky I had bought the previous night.

Having completed their touch, the OUS left and the UL entered. Because the judges were in the organ loft we had to keep very quiet. We rang a touch of plain bob triples, consisting of the following members:

We finished, and returned to the pub.

As the day progressed people went off to do various activities around the city. Becca and Rosemary went shopping, and I believe Southampton went punting. Anyway, there came a point when all who remained in the pub was myself, Edmund and Chris. We discussed many interesting and varied topics, including museums visited in Belgium and how a steam powered change ringing machine (which swings the bells, as opposed to merely striking them) might work.

We left The Swan and Castle to attend an hour of open ringing at Lincoln College from 11:30. Having finished, there was an opportunity to ring at Christ Church. However, the pub beckoned. Much of the remainder of the day was spent in The Far from the Madding Crowd, playing Cards Against Humanity brought along by Chris Griggs. Rachel Prior made the game extra fun by insisting that before comic value, our answers were grammatically correct. Fresher Alex proved to have a dark and wicked sense of humour which won her many cards, as well as Rachel’s approval.

At some point we were beckoned back up a tower. This time to ring at St Mary Magdalen for the 6 bell. Thankfully it wasn’t long and the pint I left in the pub was still there upon my return. After many more drinks, several of us made another visit to St Mary Magdalen in order to assist in muffling the bells for remembrance Sunday.

Back to The Far from the Madding Crowd, more beer was drunk and more Cards Against Humanity were played. Not before too long it was time to return to the scout hut for the results and the ceilidh. Rachel, Edmund and I made our way to a nearby supermarket to buy a vast quantity of beer before setting off up the hill.

We arrived at the hall in time for the results, read at 19:00 by Jeremy Pratt and fellow judge Michael O’Hagan. The UL came first in the 8 bell and second in the 6 bell. There was much rejoicing. The OUS provided pasta bolognese and then the ceilidh began. When the band left the foam balls came out again.

Sunday started with service ringing at St Mary Magdalen. However, Edmund and I attended service ringing at Christ Church. The muffle fell out of the tenor mid way though ringing. This set me in doubt as to my own muffler applying abilities from yesterday. After Christ Church we didn’t have time to go on to St Mary Magdalen, so we retried to The Royal Blenheim. Some time later the rest of the SUA joined us. I was informed that, to my surprise, the muffle I placed (the eight) didn’t fall off.

Ben and I had to be back in London in time for handbell ringing at Hart Street. However, before we left we had time for one more tower. It’s a shame it had to be St Ebbe’s. After marvelling at how a 4cwt ring of 8 can handle so poorly, we said our goodbyes and made our way to the station. We jumped on the next train and thus SUA was over. On the train I said to Ben:

This is the saddest part of the year.”
Why?”
Because it’s the longest time till SUA.”
After a momentary pause Ben reminded me.
It’s the dinner in two weeks.”

Thank you OUS for organising the SUA 2014.