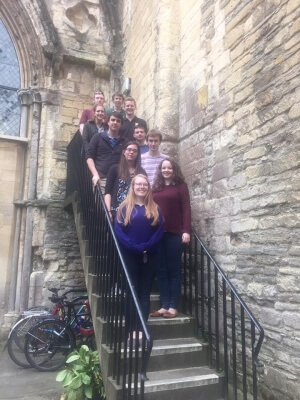 The first test of our newly elected Master came before she was even fully elected – organising the Tewkesbury Shield band.

The long and early morning train ride makes encouraging people to ring for this a bit of a challenge but our lovely Jemma rose to the occasion. I was fooled through my lack of actual knowledge about where Tewkesbury was when I was asked and I don’t know what techniques she employed on everyone else. Nonetheless, 10 under-25s were encouraged to take part and we even had a couple of practices – one of which I will admit to firing out every course we attempted… (and you were wondering why I was on the treble?)

After many train time negotiations and attempts to align ourselves with an apparently non-existent Southwark band it was agreed that most people would catch the 6:09am train from Paddington, which would allow for a Wetherspoons breakfast on arrival at Tewkesbury. I thought this was ridiculously early and opted for an extra hour in bed to ensure I didn’t murder anyone through sleep deprivation in the afternoon. I don’t know how the morning train journey went but I imagine it was as long and dull as mine. I hear that the ticket inspector wasn’t very kind to Hills and Ryan was upset about the lack of refreshment cart (my train had one and I bought coffee).

And so, we managed to arrive on time, we were all sat in the right place at 11am and the draw happened. We were second to last and let out a loud groan before traipsing to the pub garden over the road. For many hours we drank coke and, amongst other things, observed an old man drive a car backwards and forwards about 2 metres for an estimated half an hour. We also concluded that a whole course of Lincolnshire Royal is too long, we discovered that Ben M is afraid of wasps, we discussed how to reform the constitution and other bellringery things… apart from drinking.

So, the time to ring bells came. We decided to take a pre-ringing photo so that we could at least pretend to be happy. We climbed the stairs. We rang some Lincolnshire.

At this point I departed again on my bike (“Wesley <3") for the 15 minute ride to "Tewkesbury" train station and the 3 hour journey home. Alas, exam revision was calling me. I was kept up to date on the results progressed via social media and was pleased to hear that we came 2nd. This was decided to be a success all round, far surpassing our main aim of beating NUSCR. I think it would be best to not discuss the train journey everyone else had home that evening... the band: 1. Kate Wallis 2. Rosemary Hill 3 Rebecca Steed 4. Alan Eyles 5. Chris Rimmer 6. Richard Pullin 7. Jemma Mills 8. Ben Meyer (C) 9. Ryan Noble 10. Andrew Hills By Kate Wallis