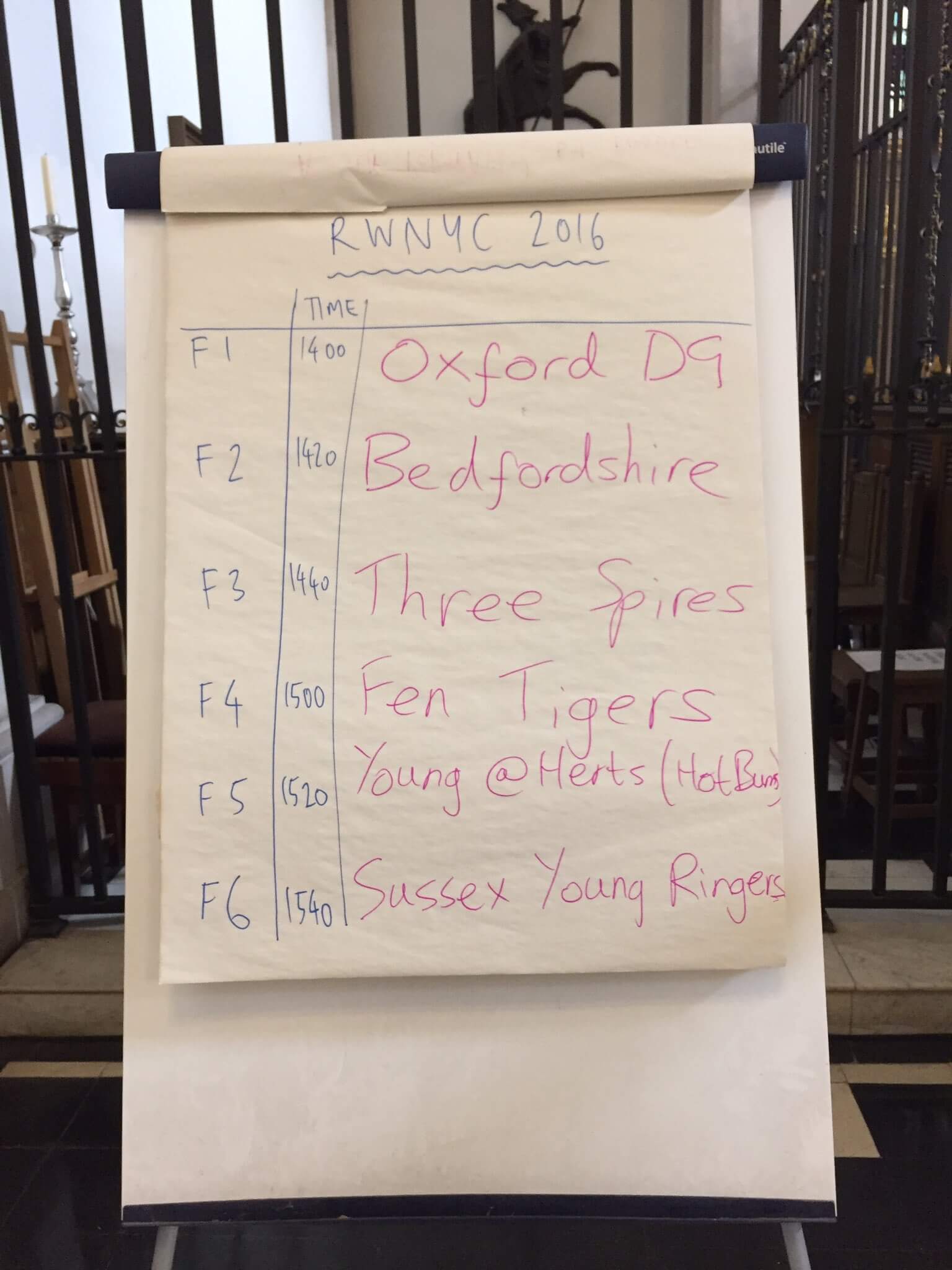 On the morning of Saturday 2nd July, I woke up to a bright sunny day, which was a great start to what was the day of the Ringing World National Youth Contest. I must say I did find the start time a little early to cope with, myself being a student on my summer holiday, but it was promised to be a good day, which I was sure would make it all worthwhile.

I arrived at the central area for the day (St Mary Le Bow) a little after 9, to sign in and get on with the day. The church was already filling up with young ringers and adult helpers. I made my way to the stewards desk to find the Poodle sitting there giving us all wristbands and telling us to use our neatest handwriting for the stickers. He did not approve of me putting a little decorative heart next to my name…

Shortly after this, I was shepherded away to St Lawrence Jewry where I was to make sure everyone got a fair go at ringing on the glorious bells, and that neither a child, or bell was injured in the process.

While I was at Jewry, there was also open ringing at St Martin-In-The-Fields, Bow, and a 12 bell workshop at St Magnus-The-Martyr. At a couple of these towers, one being Jewry, we found that the stewards were unfortunately outnumbering the ‘youths’, as most of them were either hanging around at Bow, or ringing in the contest. It was great to hear from SmiTF that Plain Hunt on 11 was rung with the ‘Coventry Spires’ team!

Many ringers that visited us at Jewry were saying how fantastic it is that there was so much to do, and all were saying they were having a great day out, and enjoying the sun while they could!

After the morning eliminators and open ringing came to an end, many youngsters returned to Bow, to ring on the bells, and to find out if they’d made the final at Hart Street! The atmosphere was tense as we awaited results from the judges to find out which two teams from each of the three towers had secured a place in the final.

Once the results were in, the church began to clear again, with the lucky 6 teams heading off to the final, and the remainder of the youths going to get a cheeky grab at the many towers that had opened up for the afternoon!

Ringing went on, fairly uneventfully; until about 5, when everyone once again filled the church at Bow for the results.

It was at this point I actually left and found the Watling, but in the pub we were receiving the full results from Martin Cansdale via Whatsapp!

Overall I think I good day was had by the next generation of ringers, and they had lots of fun activities to do. Well done to Linda Garton, Becca and Ryan and everyone else involved in organising the day! I think the stewards found it rewarding to be involved in such a busy (slightly stressful), yet successful day.