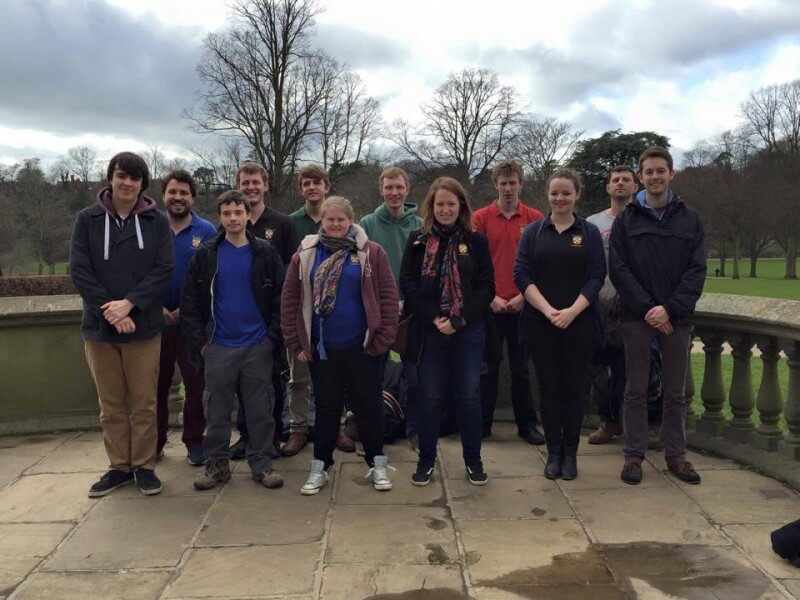 Thanks to an exceptionally strong UL band – not to mention an enthusiastic team of organisers – the UL were able this year to once again put a team into the National 12 Bell Competition. This time round the test piece was half a course of Cambridge Surprise Maximus, so in the run up to the 28th March we met up once a month(ish) and rang as much Cambridge as we could stomach to prepare ourselves for the daunting task of taking probably the youngest band entering to ring at the highest-profile event in the ringing calendar. The end of February saw the band on an enjoyable jaunt around Coventry and Shrewsbury to have a look at the tower where we would be ringing (and, more to the point, to check out the pubs where we would be drinking…), where we learnt that Shrewsbury are not at all a trivial ring of bells. Although, to be fair, all our practices had been at Bow, so we were basically down with the trickiness by this stage. I was also the most relieved person in England when I got up the tower and saw that the sallies all went in the holes #iheartshortdrafttowers

The day of the eliminators dawned bright and revoltingly early, with most of the band, plus groupies, meeting at Euston for a hilarious 7.30am train. I slept most of the way there, and so tragically missed the entertainment offered by a hen party and their genital-themed confectionary (sad times), but fortunately I did wake up in time to get off the sleek, modern train that had taken us to Coventry(?) and get on to the quaint, teensy, slightly rickety train that would carry us on to our final destination in Shrewsbury. Once arrived, we made a beeline for the tea and bacon sandwiches and had a brief sit down before heading to the pleasingly circular church for the draw. We were very relieved to be drawn to ring fourth – not too early, not too late – and having made a token gesture of listening to the first piece of ringing we found a pub to sit in and be nervous for a few hours. We quickly got bored of being nervous in a pub, however, and decided to go and be nervous near the church instead, and thus it was that the fateful hour came upon us and we all headed up the tower to do what we had come to do. In spite of the jitters, we did ourselves proud, producing one of the best renditions of the test piece that we had ever managed, and so with a slight sense of euphoria and an overwhelming sense of relief, we went to find a pub to be happy in.

I’m still not sure how we managed this next part, but somehow or other in a pub already rammed with hungry bellringers the UL and friends managed to secure a table for 15 after a remarkably small amount of faff and dither, and the drinking began. The food was nice, there was plentiful booze, and there were loads of other fun people to chat to, so the hours until the results passed very merrily indeed. After a slight confusion about the results’ timings, we congregated once more in the pleasingly circular church for the ever-tense moment of judging. We were pleased to get some good comments from the judges, and were absolutely thrilled to be placed 5th out of the 7 teams that entered. A moment of extreme excitement came when confusion over how the results were being announced implied that Birmingham might not have qualified, upon which several people dived for their phones to spread the scandal to all the ringing world, before the situation was clarified and people sheepishly retracted their gossip, restoring the status quo – Birmingham did, of course, win.

This is where this whole tale starts to become rather more interesting. As most of us had to catch trains to wherever we were going, there was basically no time to do any drinking in Shrewsbury. The solution: drink on the train. Obvs. I literally have no idea how we weren’t kicked off the train we were on – there was an impressive amount and variety of alcohol being consumed, and we were getting a bit rowdy as only the UL can on public transport. My memory starts hazing over at this point, but there was definitely port, whisky, wine, beer, some manner of food, a brief experiment with the logistics of aisle-way salsa dancing, and apparently I told everyone what my father’s code is for his phone. We staggered off the train at Euston, decided we weren’t drunk enough, and headed to the Cider Tap – in my experience, a recipe for a messy night. And a messy night is exactly what we got. The events have become legend, but suffice to say quite a lot of us did not manage to get to Sunday morning ringing the next day. Blergh.

Huge congratulations to all the band that rang, we did ourselves proud! Many thanks go to our supporters – those who helped us out by ringing at practices and coming out to cheer us on at Shrewsbury – and most of all to the organising team and their tireless enthusiasm. Bring on next year’s competition!