Summer tour began for me at Heathrow Airport, where I picked up Kate and Tom. The the first half of the journey was very slow and uneventful, but things got more exciting when Tom directed me off the M3 onto a ‘shortcut’. Unfortunately, I came off at the wrong junction and then we were immediately hit by rain so heavy that we couldn’t see any of the exits from the roundabout which we were accidentally on. After a lot of unnecessary driving, we stopped off at Tesco for food and alcohol, but when we tried to pay I realised that I had left my ID at home. Luckily the nice man on the checkout believed that I was over 18 once I had shown him my student ID card and every other form of ID which I had with me. Unfortunately, this meant that I couldn’t buy drinks for myself all weekend (sorry about that Tom!).

Eventually, we ended up outside Chez Matthews. Ignoring the plumber’s van outside the house, we all piled inside where we were informed that the toilet had flooded that morning but had just been fixed (luckily, because some of us had been in the car for over 4 hours). Tent pitching ensued, followed by a sneaky cider to ensure that I wouldn’t become designated driver for the evening. The first night involved a trip to the beach for a BBQ consisting of some slightly sandy sausages and burgers cooked by Tom and Anthony. We then headed down to the beach to watch the fireworks. After someone suggested that it might be warmer in the water than out of it, Kate and I decided to go skinny dipping. This went well until we noticed some children who had been watching the fireworks, but were now watching us.

The evening ended with more drinks back at Anthony’s house, where ‘Treble’s going… she’s gone’ was heard before we had even got to the first tower, as the answer to a discussion on what would happen if Taylors dropped a bell as they were going back into St Paul’s. Other discussion topics from the evening included Kegels, Kate’s wet crotch and Tim’s perception of women as ‘men with penises inside out’.

Saturday began with ringing in Bournemouth at St John’s and then St Peter’s. We had lunch at a Wetherspoons in Bournemouth, where baby Edward was the main attraction. After lunch there was some ringing at Sacred Heart, although some people were much more interested in playing with Edward. At this point the promise of a viola lesson from Mrs Matthews caused us to lose the Poodle for the rest of the afternoon (she later described the lesson as ‘entertaining’). He had already decided that he had better things to do than to return for the evening’s entertainment at the beach, which was lucky as Mrs Matthew’s let everyone know that ‘I’m not letting Peter Jasper anywhere near my beach hut’.

The rest of the afternoon was spent ‘fluming’ at Splashdown. It might have been sensible to bring a proper swimming costume, but I brought a bikini which had to be tied in 4 places, and most of the girls experienced some clothing malfunctions and subsequent boob-cupping whilst going down the flumes. Tom provided some amusement by hitting his head at the bottom of a slide, going on the slide again and then hitting his head again in exactly the same place. Despite the unpleasant combination of hangovers and flumes, as far as I know we don’t have a new Captain.

We stopped off at Tesco to unnecessarily top up our alcohol supplies, and then returned to Casa del Anton where Mrs Matthews kindly gave us a lift to the beach. After a game of rounders and some fish and chips, Tom got wood and Anthony told Ryan that he was a good blower.

We got up far too early on Sunday and got the bus to Poole for service ringing at St James’, where they were so excited to see us that they had included us on the service sheet. While we were waiting for everyone to come down after ringing, a few of us joined in with the first hymn from the porch until they shut the door on us, at which point we were very offended but decided that breakfast was better than hymns anyway. It was very wet outside so we managed to make breakfast last a couple of hours. Most of us emerged from the boat to Brownsea feeling slightly wobbly, either from seasickness or from the beer drunk during the crossing. As the boat had been delayed and the church service had been cancelled, the QP which had been planned was cancelled in favour of some general ringing which included Bristol Major and Queens firing. The firing was intended just to pacify Ryan, but actually sounded surprisingly good and had to be repeated so that we could record it (of course it didn’t sound as good the second time).

After this, some of us went to the cafe and some hid from the rain in the gift shop before we got the boat back to Poole for a pub crawl. I don’t remember much of this, but the best pubs were the ones which had snooker or bar billiards, and the worst one was where Ryan found a juke box. We ended up at The Stable for cider and pizza, where everyone ate and drank far too much. On our return home, Anthony announced very loudly ‘Shhhhhhhh, my mum’s asleep. And we like her, remember!’.

Thank you very much for Ryan for taking over the organisation of the tour at the last minute, and to Anthony and Mrs Matthews for putting us up and putting up with us all weekend. 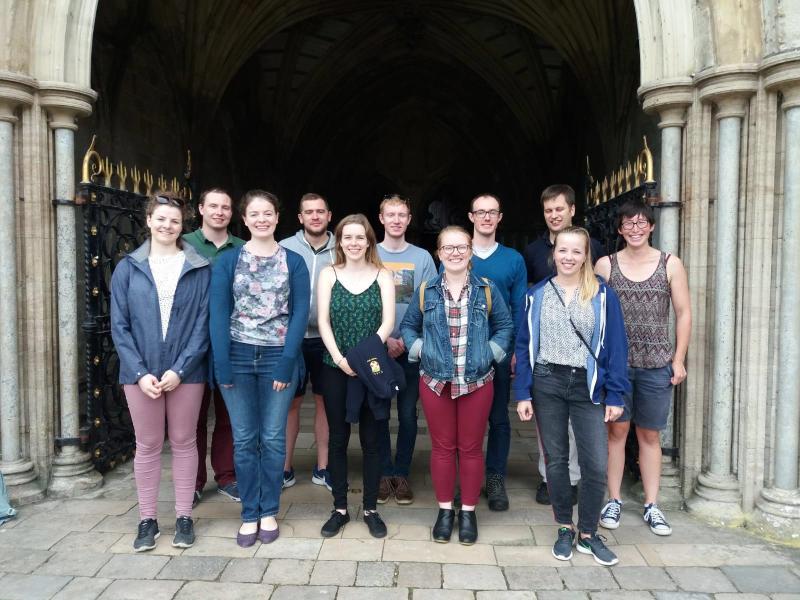