New Year’s Eve saw a large number of UL members arrive at a non-descript pub outside St James’s Park tube station. Beers were bought, as you would expect and much sought after blue wristbands were obtained that gave an ‘access all areas’ pass allowing us past the police-lined barriers and into Parliament Square. A couple of quarter peals were attempted of Stedman and Grandsire Caters to ring the old year out along with some open ringing on the half muffled bells of St Margaret’s. In between times, the vestry had been turned into the main UL New Year’s Party venue with a large array of food and drink available to enjoy. As midnight approached, the UL ascended the tower to stand out on the roof to watch the fireworks at midnight on what was otherwise a relatively mild and dry evening. After the display, the New Year was rung in with the UL managing to fire the bells successfully and then to spectacularly fire out any attempts at Queen’s firing! Well, let’s start 2016 as we mean to go on! The remainder of the food and alcohol was consumed and everybody wended their way back home to grab a few hours kip. Unusually there was no attempt to drink all night or find some sort of late opening pub (which is not that difficult in the early hours of New Year’s Day!), it was almost as if certain members were getting nervous about ringing later that morning… 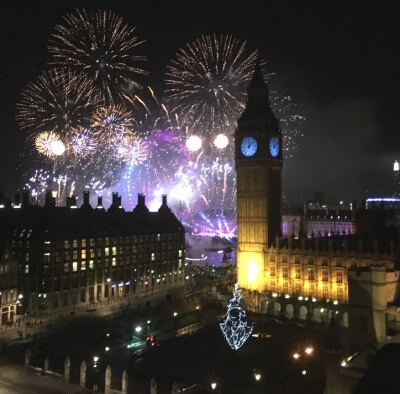 New Year’s Day dawned a few hours after we had left St Margaret’s. There are certain things that all ringers want to say they have done. Firstly, it is probably to handle a bell, then perhaps to stay right in a touch of Plain Bob. Later on it may be to have rung a quarter peal or conducted a peal or even to remain sober at a UL Dinner (OK, I lied about the last one!), but probably one of the top things on most ringers’ ‘100 Things To Do Before You Die lists’ would be to have rung at Westminster Abbey.

The ULSCR is obviously celebrating its 70th Anniversary this year and to mark this milestone, Michael Uphill, a member of the Westminster Abbey Company of Ringers, suggested that the UL might be invited to ring at the Abbey on New Year’s Day. This was agreed and the invite was sent, the first such invitation ever to have been sent to a university ringing society. The unenviable job of choosing those people to ring however would be down to Chris Rimmer and to make matters even more difficult for him, he also had to organise from those invited to be in the open ringing, a band of 10 to ring in a ‘you-had-better-score-this’ quarter peal.

So it was that ‘about 20’ UL members gathered nervously outside the Great West Door of Westminster Abbey where we were met by Jeremy Pratt and several other members of the Abbey Company. We made the ascent up the tower (and were very impressed by the metal-reinforced steps – why don’t more towers do that rather than just let them get worn away?) to the large, bright ringing chamber. The walls are all adorned with identically designed peal boards celebrating virtually every major national and royal event of the past century. We were unable to start ringing until 1pm (and being 100 yards from Big Ben, there was little argument to be had as to when 1:00 actually was), so Jeremy gave a short history and tour up to the bells. The Abbey are a surprisingly relatively modern 10 only dating from 1971 (they were only a 6 until 1919 and were nigh on impossible to ring until they were augmented to 8 and then completely recast as a 10). There are 5 of the original bells remaining including two bells cast during the reign of Queen Elizabeth I. 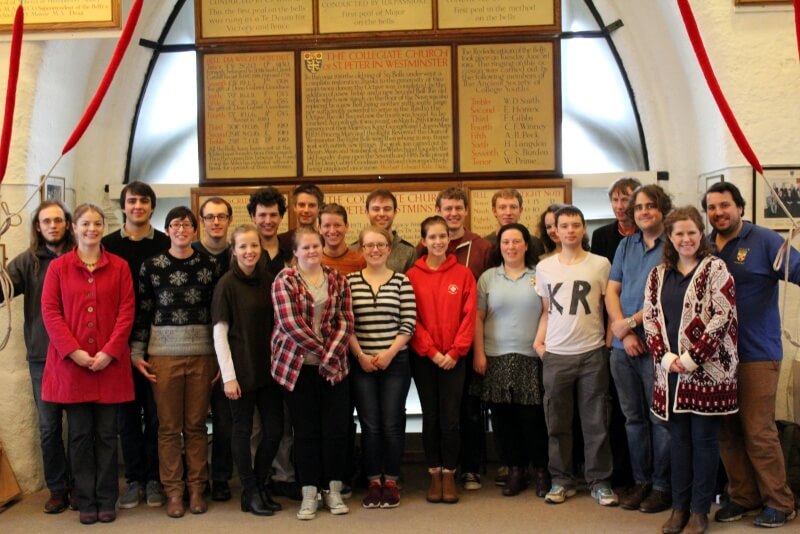 As 1pm came, the UL grabbed hold to pull off in what was a somewhat nervous touch of rounds and called changes. The second ring included ‘roller coasters’, much to Rosemary’s delight – and the UL struck it as well! For once there was no problem in reminding everybody to sign the visitors’ book!

Following this, the UL grabbed hold for Stedman Caters. We had Andrew Hills conducting from the 9th, a dead cert UL band inside (well it would have been had they not put me in it as well!), I mean what could possibly go wrong with this notoriously easy method to keep right and one that never ends up in a massive fire out! Yet again the opening rounds were good, going into changes did not see anybody go the wrong way or try ringing Grandsire instead, everybody even remembered to go up to 8-9 dodges even though that never works at Hart Street! In fact the UL rang beautifully, well we rang the first half fine, but then there was an almighty crash and then the 9th fell silent as its clapper fell out smashing through the slider in the process. For the first time in a century, Westminster Abbey’s bells had been put out of action through mechanical failure and the UL were on the end of the ropes at the time! The quarter peal was obviously not going to happen any more and seeing that everybody had already signed the visitors’ book, the default crisis plan when we’re in trouble for breaking something – leave an apologetic note from the CUG and run away – wasn’t going to wash either! After checking that everybody had had a grab (apart from Chris who was promised to get a rope at the next available slot – keep a watch out for the next Royal Wedding!), Jeremy lead us on a personal, guided tour of the Abbey instead.

The Abbey looks huge from the outside and it is absolutely massive inside as well. The nave has the highest roof of a gothic church in the country and has huge windows which means it is surprisingly light and airy inside. We started our tour at the Tomb of the Unknown Warrior (the only grave you cannot walk on) and headed up towards the Quire. There we passed what Asher and I decided was ‘Physics Corner’ as not only Newton, but basically every other British Physicist you’ve ever heard of (which is basically everyone apart from that Swiss guy who sticks his tongue out a lot) has a memorial. Nearby were memorials to most of the famous Prime Ministers of the past, David Livingstone, Ernest Shackleton and pretty much everybody else in ‘The Big Book of British Famous Dead People’! On through the Quire we saw the high altar and the various tombs of the medieval monarchs (later ones are buried at Windsor), including Elizabeth I and Mary I who may not have been best buddies in life, but are, in death, next to each other whether they like it or not! Our trip ended up at Poets’ Corner to see the memorials to basically every author, playwright and poet you’ve ever heard of (and several I admit I hadn’t, but in my defence I studied Physics and haven’t read a book that didn’t have Harry Potter in the title since my GCSEs). Finally, as we left we saw the new display on the Coronation Chair which, I must be honest looks like a rather well used, tired old wooden seat. However, I suppose it is over 700 years old and was last sat in by the Queen in 1953 (although certain well known ringers have allegedly also tried it out for size since then)!

It was then becoming high time for lunch and a celebratory pint where Andrew Hills was presented with the 9ths slider (now in 2 parts)! The afternoon saw the Queen’s Tower at Imperial defeat a majority college band in their quarter peal attempt as part of the 70 quarters challenge.

Thank you very much to James White for organising the ringing at St Margaret’s on New Year’s Eve (can we come back every year please!) and to Michael Uphill, Jeremy Pratt, Nigel Thomson (a former President of the UL) and the rest of the Westminster Abbey Company of Ringers for allowing us to come and ring at their tower even if we did prove that even the most prestigious towers in the world are not made UL-proof! 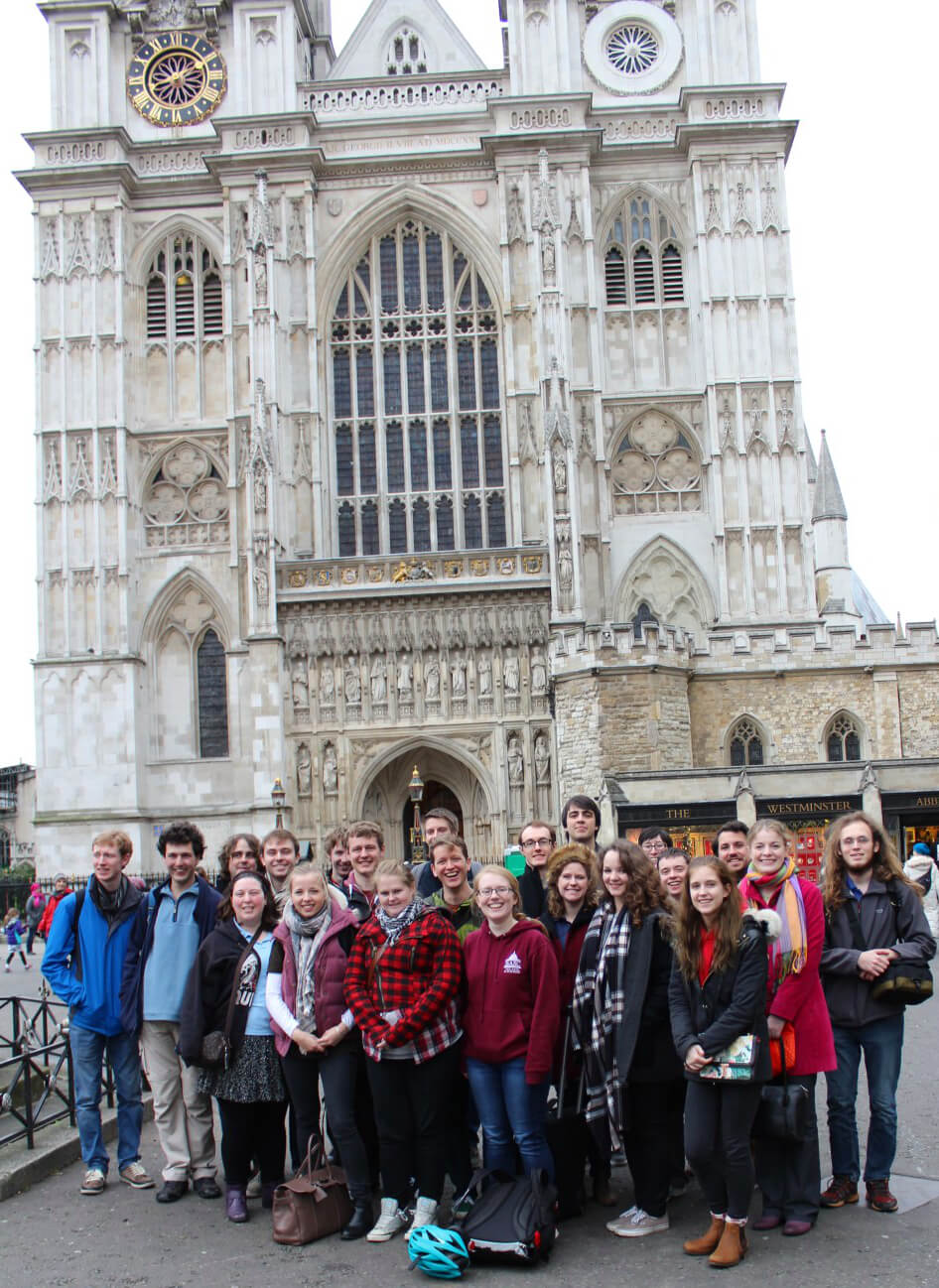