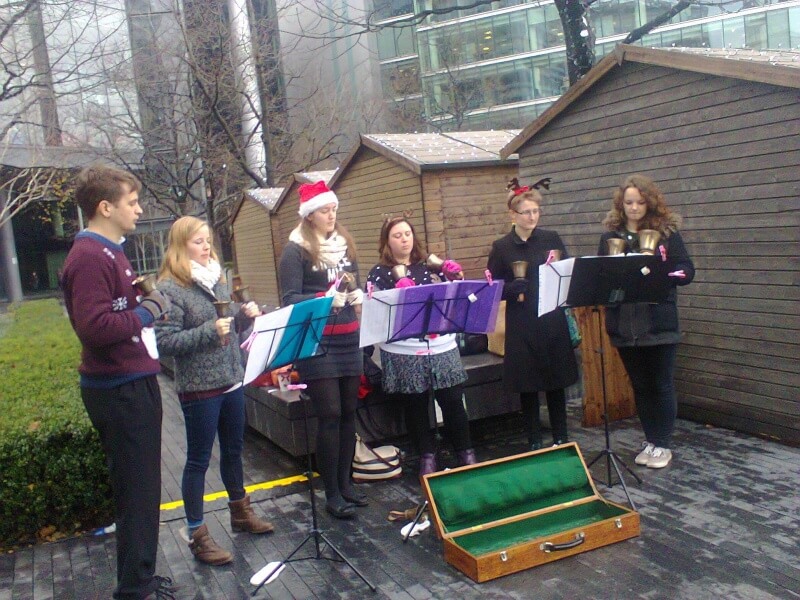 Well it seems to be that time of year again – time to brush off the music stands, crack out the handbells and start the carol-ringing season again! By now something of a fixture in the UL calendar, a band of dedicated festive handbelling keen beans gathered once again to see how much money we could raise in exchange for our expertise in tune ringing this December. Cue the micropore, cue the festive jumpers, cue the merriment.

Enthusiastically and ably rehearsed by Jacqui Brown, we met up the tower at Hart Street to run through our extensive repertoire of seasonal tunes, from Jingle Bells to Good King Wenceslas. We were undaunted in the face of the infamous Glorias in Ding Dong Merrily, and the dreaded runs in Angels from the Realms etc – we laughed in the face of ferocious speed in Jingle Bells, and performed devilish descants in Silent Night and We Three Kings.

Practices complete, we set off for our performance dates. A combination of miscommunication and awkward availability had left us a few practices short of where we thought we would be, but we were fearless in the face of the coming task and set up our music stands next to the Big Christmas Tree at the More London Christmas market in good cheer. The Tulse Hill boiler may have been broken, but our Christmas spirit was not.

Our first performance, accompanied by our loyal bucket shakers, was plagued by such hazards as strong winds, the smell of mulled wine, and a man playing a guitar loudly and badly in a giant Christmas present shaped food marquee next door. Slightly deterred, we renounced the effort after a few rounds of our range of carols and went to the pub.

For our next performance we decided to defy the powers that be at More London, and abandoned our designated post by the Big Christmas Tree. Safely ensconced in a cosy corner of the market, we could not only hear ourselves ring but could also scout out the street food opportunities while ringing! An excellent development, and one which I took full advantage of by buying many churros and more mulled wine. We rang until we could ring no more, and then went to another pub. 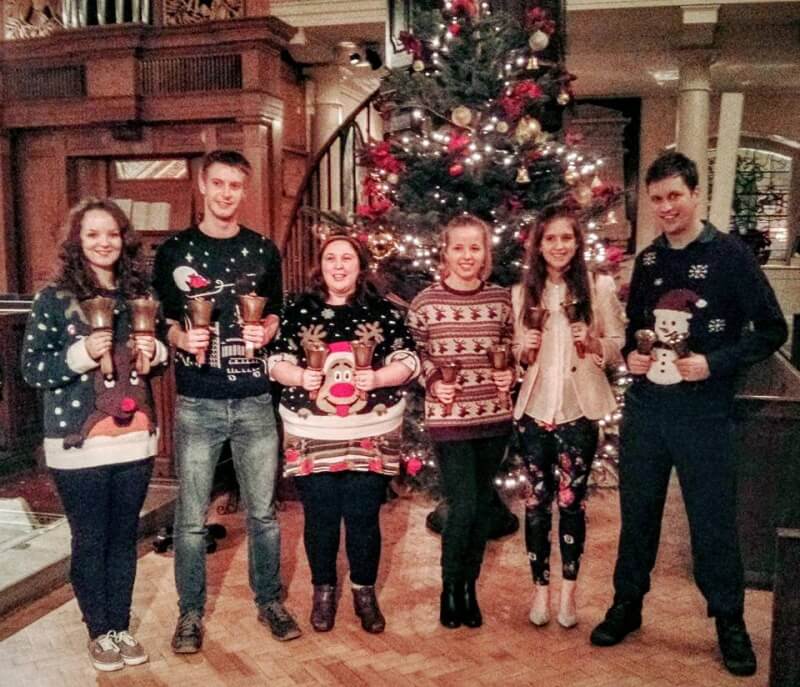 For our final encore, we had scheduled a guest appearance at the Surrey Ringers Carol Service in Battersea. A daunting prospect, but one which we approached with relish and panache (the relish had nothing, nothing I tell you, to do with the mulled wine and mince pies that we had been promised).

The church was a picture, the choir were perfection, and the choir master’s shirt was pink as pink can be – the scene was set. We rang Silent Night, accompanied by organ, choir and congregation, and it was delightful. A cheeky rendition of Jingle Bells also went down well, despite the fact that after several weeks and three

performances I still couldn’t get the tenors to ring at the same tempo as the rest of the band, and we adjourned to enjoy our mulled wine and mince pies.

Many many thanks go to Jacqui for her tireless enthusiasm and undaunted good cheer throughout the whole process – without her organisation and dedication this fund-raising effort would not be possible. Roll on next year’s overdose of mulled wine, mince pies and Christmas tunes – I know I can’t wait!