Saturday, 19th July 2014 was the occasion of the wedding of Jacqueline and Christopher Brown at St Martin of Tours, Epsom. Both Jacqui (née Bale) and Chris are members of the Guildford Guild and the University of London Society of Change Ringers, and ringing played a large role in bringing them together. They were introduced in 2007 by Alice Etherington, who had arranged a quarter peal at Hingham, Chris’s then home tower in Norfolk. In the week running up to the wedding a quarter of Hingham Little Bob Major was duly rung at Ashtead (Jacqui’s early home) with the couple in the band. However, it is not to be recommended since the conductor pronounced it “the most dire method I have ever rung!”. Mike Trimm (UL member), who has conducted a peal of it, agrees whole heartedly! The return match (Ashtead Surprise Major being rung at Hingham) is being contemplated…

On the day itself Jacqui had arranged ringing opportunities for their guests at six local towers, resulting in two peals and three quarter peals being scored. 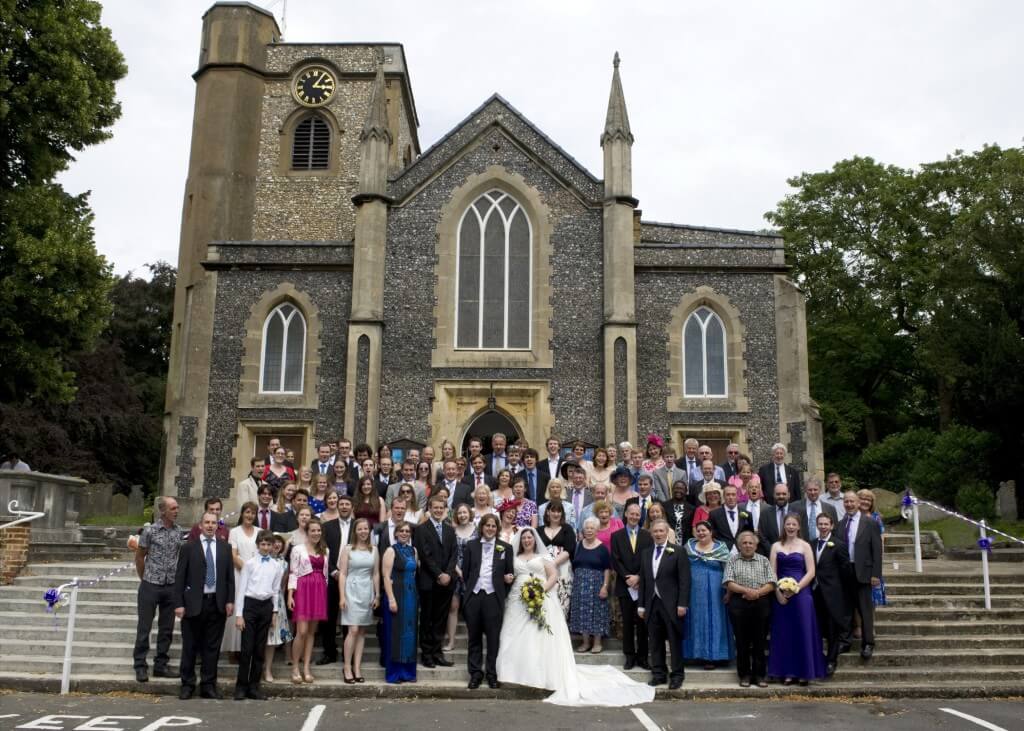 Ringing and ringers played a prominent part in the marriage service: ushers, readers, and one of the bridesmaids were bell ringers. Even the minister, Canon Adrian Esdaile, proved to be a ringer in disguise when he started his sermon by telling of his first quarter peal in Wimbledon over 40 years ago. He spoke of the similarities between bellringing and marriage and the need for team work in both, and made the point that arrogant egotistical people shouldn’t be ringers or get married! There were over 80 ringers present among over 200 guests in the church, and a special ringers’ photograph was taken for the wedding album. 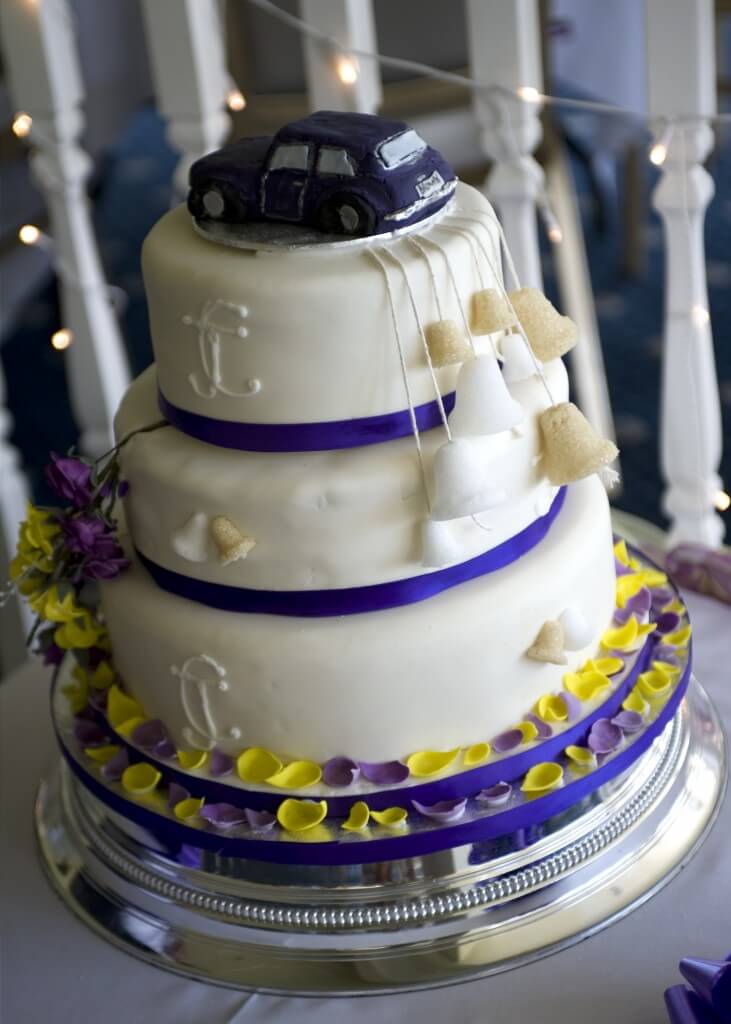 The wedding reception was held at Kingswood Golf & Country Club, where guests enjoyed drinks in the sun on the terrace followed by a wedding breakfast of Melon, Lamb and Baked Alaska. In his speech Jacqui’s father (Mike Bale) listed ringing as one of the boxes that Chris ticks, and stressed its importance as excellent ‘glue’ in marriage when it is a shared hobby. In his reply Chris noted that he had notched up over 600 train hours and 40,000 car miles (not counting the hours stationary on the M25) during the years of commuting from Norfolk to Surrey – but said it was worth every minute!

The Wedding Cake (made by ringing friend Liz Hughes) was topped by a sugar Mini car, and the evening buffet featured a “Groom’s Cake” in the shape of Lundy Island (baked by the UL’s Mariko Whyte), complete with a replica helicopter of the kind that rescued the groom when he dislocated his knee on a UL Lundy trip.

The couple’s honeymoon was a driving tour in Europe, taking in Vienna, Salzburg and Paris, before returning to their new home in Ewell. We wish them all the best for their future together.

PS: Chris and Jacqui would like to add their heartfelt thanks to everyone involved in making the day so special and moving.