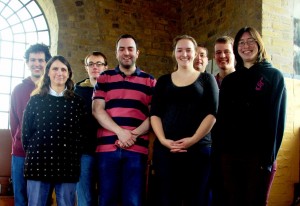 At the UL, we are very fortunate to have enough current students, active past students and ‘wannabe members’ to continue hold an Annual peal weekend. This year, as it does every year, our peal weekend took place on the second weekend in February. We had ten peal attempts booked in between Friday lunchtime and Sunday evening, as well as three pub sessions.

Friday lunchtime started off at St Andrew’s Holborn where we met 9 people, although this was intentional as the church had requested that we have someone on duty as “Fire warden.” Some of us wondered what the job entailed and whether the Fire warden should come up the tower and tell us to stand if the ringing started to deteriorate. In any case there were no fires in the church and we scored a good peal of Cassiobury S Major. After lunch most of us had a short break in the pub before heading onward to the two evening peals – one at St Dunstan in the West, of Lincolnshire S Royal, this being the first time the society had rung at the tower and later a handbell peal at Hart Street, where 4 Spliced S Major was scored. Following this we enjoyed several beers in a suitable establishment on Fleet Street. 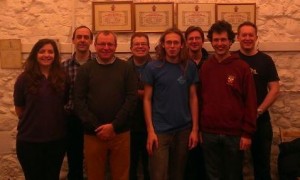 Saturday morning was an early start for some, we travelled out to Carshalton, which was one of Tom Wood’s local towers. We scored a peal of the Standard 8 spliced, this being the first of Spliced for Tom. At roughly the same time, a peal of Yorkshire S Major was scored at St George in the East, Stepney which was David Phillips’ first peal. After a detour back from Carshalton (due to a broken down train) both bands, and several other people eventually met up for lunch at the Crosse Keys. After lunch the two afternoon bands rolled out from the pub to attempt a peal of Cambridge S Major at Hart Street, which was scored and was Sophie Middleton’s first peal. The 12 who met to ring Stedman Cinques at St Magnus, were unfortunately not successful when we had to stop after about an hour. 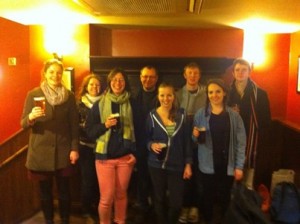 The Saturday evening is notorious for being the real social part of UL peal weekend, drinking commenced immediately after ringing finished and we later headed to the Hare and Tortoise at Blackfriars for food. Some of us tried to get into Reflex (the 80’s music club) later on in the evening, but it was decided to abort when we realised that we were going to be charged to get in.

Sunday morning was sore heads and hangovers; so it was just as well that we didn’t have any peals that morning. In the afternoon we had three attempts; the first of which was at St Clement Danes immediately following the morning service, where Kate Wallis rang her first peal of Surprise Major. Later on in the afternoon we had a St Olave’s Society attempt at Willesden of Bristol Major, which was unfortunately not successful and a final peal was scored at St James, Garlickhythe of Plain Bob Major, which was a first for Jenny Willis.

This was the most successful peal weekend in recent years, with 8 out of 10 peals being scored, 3 first pealers, the majority of our current students ringing in an attempt and in total 37 people taking part (including those who didn’t score a peal). Overall we had some good ringing, drinking and an enjoyable weekend.