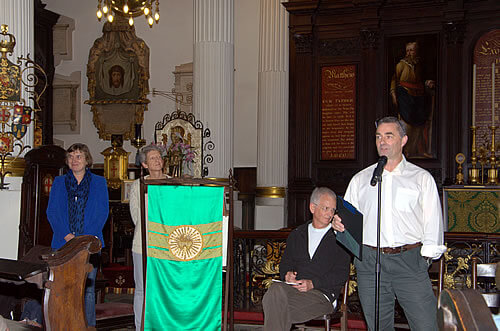 The London 12 Bell Competition for the Whitechapel Trophy this year was hosted by the University of London Society. The UL is not one of the larger societies taking part in the competition, but what it lacks in size it more than makes up for with youthful enthusiasm. Having taken on the organisation of the fifth competition and, by kind permission of the rector, The Rev Philip Warner and tower keeper, Dickon Love, decided to return it to the first host venue, St Magnus the Martyr, the UL did what it does best and had a bit of a dither.

Then as the build up to the competition came and team after team booked Magnus bells to practice the test piece – a half-course of Cambridge Surprise Maximus – minds were focused and the real strength of a large group of active and committed students (and ex-students) really came into its own. Early in the morning the troops arrived, Jacqui Bale brought a dairy worth of milk, Becca Cullen a suitcase packed with bacon, too many UL members to name arrived with home-baked cakes. A rather large number of which had been baked the previous evening, after the UL’s last 12-bell band practice, or the same morning, due to staying later than intended in the pub. In the church the cake stall took shape and Great British Bake-off would have been proud, whilst downstairs the kitchen resembled a mass catering challenge from Masterchef, as 120 rolls were buttered and 240 rashers of bacon cooked. Becca, leading the catering team, remained calm under fire. While this was going on, Adrian and Helen Udal transformed the rector’s study into judging HQ, for Martin Whiteley (Chief), Maggie Whiteley and Liz Orme, with a sound-feed to ensure that no detail was missed. As the church started to fill with excited ringers, we were relieved to feel ready for the day.

The London 12 bell competition has some novelties, setting it aside from other ringing competitions. The name gives it away, but it is for London teams who ring on 12 within Greater London. With a range of ringing societies eligible, some of course ring more frequently on 12 than others, which means the competition for middle order placing is often as hotly contested as at the top. You don’t have to ring in London for long to realise there are a lot of towers, and a lot of challenging rings of 12. In order to have sufficient ringers for so many of these towers, most individuals ring with more than one band. A typical Sunday involves a network of individuals crossing the city to ensure all the bells are rung. The London 12 bell competition recognises and embraces this fact, allowing people to ring for 2 bands, with further rules specifying that a person can’t ring the same bell and that bands can’t be constituted of more than 50% of the same ringers as another band. The competition’s Secretary, Michael Uphill, has the unenviable task on the morning of the competition of comparing team sheets to ensure we comply with these rules. When he announced at the draw that all teams were eligible there was a great feeling of relief that the jigsaw puzzle had worked.

After a welcome by Competition Chair Stephen Mitchell, Alan Hughes, who donated the Whitechapel Trophy, conducted the draw. After a series of late draws, the Southwark team was delighted to be drawn fourth. The St Paul’s Cathedral band much less pleased to be drawn tenth and last to ring.

During the ringing period the Competition can feel quite rushed – each band has a 20min slot in which to practice and complete the test piece – which means that the changeovers between bands need to be speedily accomplished. With ringers being in up to 2 bands even the logistics of meeting with the correct number at the bottom of the tower can be challenging, you can’t just assume a missing ringer is lost or late, they might already be upstairs ringing.

The test piece is another novelty of this competition. This year’s piece was the first 6 leads of Cambridge Max, although the first 2 leads were not marked. The judges commented that this was a good system, allowing bands to settle into the rhythm, but they had found a perceptible change when bands moved from the un-marked to the marked section.

One part of event management that is always tricky is getting the landlord of the designated pub to believe just how much ringers will consume: beer (lots), food (lots) and lager (next to nothing). Perhaps due to the late draw of St Paul’s Cathedral, who have never let ringing get in the way of keeping the bar busy, and the relatively early draw of Southwark, it didn’t take too long for the pub to be drunk dry. Although the upside was that motivating people to leave a pub without beer for the results did not seem to be difficult.

The judges efficiently turned around the results in just over an hour after the last band rang – a mammoth undertaking given there were 10 teams to be ranked. Bang on the scheduled time, Martin Whiteley as Chief Judge gave us a general overview of the ringing that had taken place during the day. Maggie Whiteley took us through peal speeds and comments for each band and then Liz Orme gave the all important results, before Competition certificates, designed by Andrew Hills, were presented to the top-3 bands and the trophy was presented by Alan Hughes to Shirley McGill and Olly Cross for the Cumberlands, the first time this society has won this competition. One result of ringers being eligible for more than one band is the possibility of some mixed emotions at results time, sometimes by a considerable margin. This year one ringer was in the winning team and the one that came last.

After the results a new pub was required and many of the participants made the short walk over the river to The Sheaf, where we made significant in-roads into their beer and jager-bomb stocks. No doubt there were many people who benefitted from the additional hour’s sleep overnight as the clocks went back – surely an essential feature for the day after any striking competition.

The next competition is scheduled for Saturday 25 October 2014, the tower yet to be confirmed.