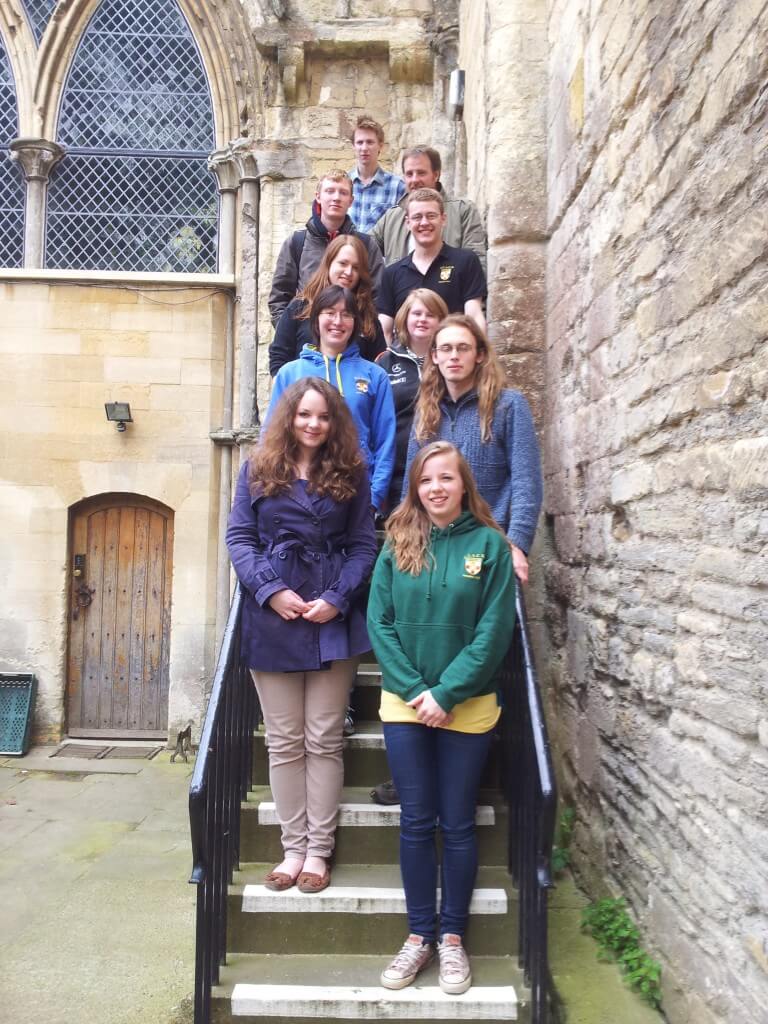 The Tewkesbury Shield competition was initiated in the early summer of 1973, a date which the majority of the band was very unfamiliar with! This meant that this year was the 40th Tewkesbury Shield competition, and would be held despite the BBC over exaggerating the flood situation. The organisers allowed every team 10 vouchers that entitled them to a free pint of beer or tea and cake – not sure if anyone took this option…?

Bright and early on the morning of Saturday May 5 2012 seven members of the team arrived at Paddington to catch the 0621. Concern immediately occurred when the train left that Katie Lane had not turned up… A quick phone call later confirmed that Katie had gone home the night before and was hoping to have a nice lie in! Oops!

After finally arriving at Worcester a quick breakfast was needed before changing to get to Ashchurch by, well me! Travelling between Ashchurch and Tewkesbury meant we had to walk and there was no bus service that weekend – most inconsiderate of Cheltenham and Gloucester buses. A short walk into Tewkesbury meant a quick breakfast in the Royal Hop Pole, Weatherspoon establishment near the church before the draw. We were pulled out at 4th just before lunch.

After a moderately heavy lunchtime session with the Bristol ringers in The Hop Pole (again); ringing happened, full details of which are provided on the Tewkesbury Shield website… The judges, Paul and Kate Flavell scored the teams as follows:

Improvement noted from the last two years!! We did not come last – well done everyone!

Some of our number had to leave at this point, but the rest of the semi-victorious UL hit the pub (The Hop Pole for the third time). Drinks were enjoyed at this cheap ‘Spoons especially two cocktail pitchers for £15, and shots… Mariko and Tom had a brilliant stroke of German efficiency and went to gather supplies for the train home, unlike everyone else!

An urgent departure was needed and no taxis available meaning some downing of pitchers or more sensibly choosing the take-away option. Some very nice raspberry vodka courtesy of Katie Hill was also consumed en route. At this point Simon Percy who failed to get back with the Bristol ringers realised he had left his mug in the pub and had to run back and catch our train to Bristol! He arrived on the wrong platform as the train departed – special boy!

The train journey home involved drinking, Ben being wasted and passing out causing much concern to Heather and amusement for Ryan and me! It turned out Mariko was even more wasted when she vomited all over the seat next to her – twice!! All in all it was a good day and I’m still not sure how I got home!

Thank you for everyone who rang and to Mariko for her organisation.